Conclusion: My first thought yesterday evening was – why the hell are you jumping into that many matches after the international break. Well, after the post-match analysis, I have to say I’d do it once again. Well, after several rounds of constant profit, bookmakers were better than me in this 11th round. As everywhere else, it’s very important to be self-critical in this business, and seeing the list of leanings, it’s obvious that I “ran away” from three matches – four picks, that would be graded as winners, but at the same time I can not be too disappointed about it as – or odds weren’t as high as wanted, or I decided to skip the match after analysing it. The match between Montpellier and Strasbourg was a complete coin-toss, where the guests actually had plenty of chances not only to equalise, but even to win the match, while Lorient had a 200% chance at 1-0 and everything might chance if the ball went in? Well, to be completely honest I stayed away from Lille only because I messed up with the pick on Lyon, who disappointed me completely and it seemed like adding Lille would only be a “gambling way” of saving the weekend. Funny thing, Lyon actually ended up winning the match, even though they deserved it much less than Nantes or Rennes. As Munro said, losing is a part of winning and we continue our marathon to another profitable season in Ligue 1. 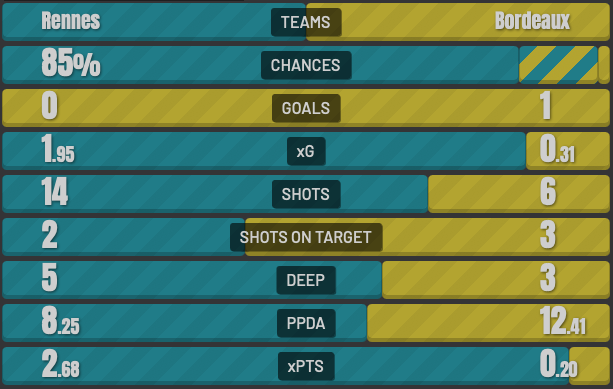 If they repeat this match with similar performances from both sides, I’d bet my arm that Rennes would win at least 9 if not 10 times. It’s simply one of those where you have one side much superior, but incapable of putting the ball in the net, while the opponent scored almost from their only shot. All in all, I’d repeat the same pick and I am not disappointed about my decision, taking odds slightly under my wanted odds as you can see on the list of leanings above. 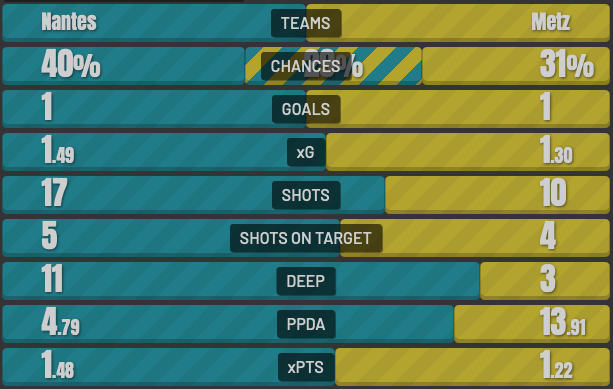 I believe that everyone who watched first 30-40 minutes, hardly believed how the performance of Nantes dropped after that, especially with the start of the 2nd half. Still, they had 18 shots, 66% of ball possession, they were somehow controlling the match, but they simply can not hold the level of performance for the entire match. Regarding the odds, that is another bet I would repeat with eyes closed, as the value was definitely there, but it just didn’t pay out this time. 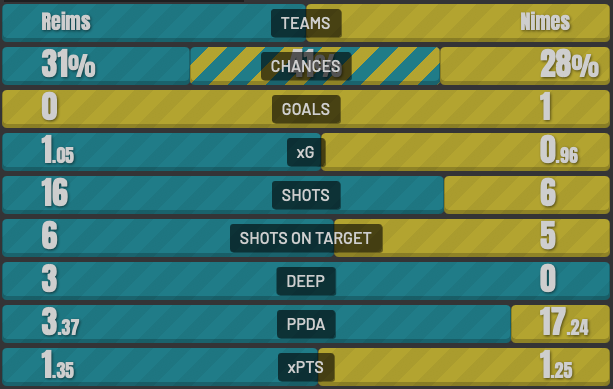 As written in the analysis, both teams came in the match pretty much weakened defensively, as Nimes started without their captain, key defender Briançon and fullback Melling, while Reims were without the first goalkeeper Rajkovic and their best rated defender Fans. Reims started solid, preparing chances, but they simply didn’t realise any of them. Nimes on the other side looked like not even interested to score. In second Nimes scored from a penalty, so I thought Reims will push for the equalising goal, but once again, they simply couldn’t beat Reynet who saved two situations directly from the goal-line. Turning it into numbers – Reims created even a bit more chances against Nimes than last round against Lens where they scored 4 goals! The only reason why Nimes “boosted up” their xG in this match was the counter attack with 3 players “on a goalkeeper”, but Diouf saved it. 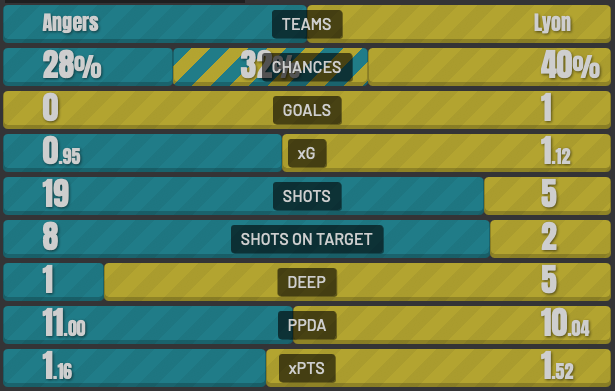 Even without Toko-Ekambi, Rudi Garcia didn’t pick Dembele to start the match, but as written in the analysis, Angers simply aren’t the team who does something when you slightly expect it. Lyon with plenty of youngsters in the first 11, odds dropping on Angers – that was also the only reason I took both picks as odds were nowhere near them on Friday for example. Lyon started the match horribly, it was all about Angers and to be fair, Angers deserved at least a point in this match.