Conclusion: Firstly, when seeing the fixtures I said to myself – that might be the round without an official pick. After writing down my leanings, as you can see, I actually found slight edges with three matches. With Monaco I dug deeper, went on half-time market, with Lyon I picked the over, but I skipped Angers even though the odds were actually high enough to represent value for me. As said several times, they are a typical “dark horse” in this league, getting points from matches like this, but losing them when being favourites at home. All in all, I am satisfied with this round as for both voided bets we were much much closer to getting them than to losing them. 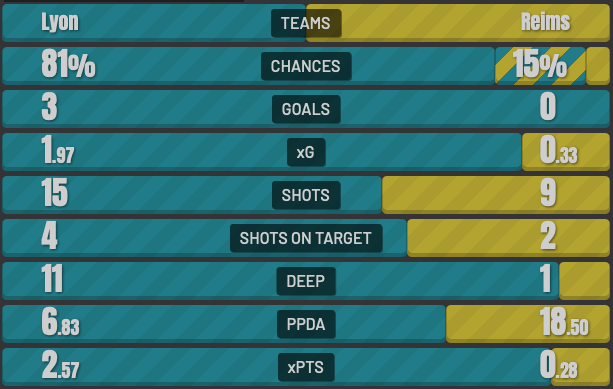 I think that was the best performance of Lyon so far this season. Garcia lined up the expected lineup with Toko-Depay-Kadewere up front, leaving Aouar out (suspended by the club). As mentioned, Lyon definitely have an extremely powerful squad, but they had plenty of problems, and they are still fighting to find the way how they “want to play”. I had handicap as one of possible picks here, but exactly due to the inconsistency of performances, I decided to take only over here as 2,20 for -1,5 simply wasn’t enough for me. Lyon could easily score 5 or 6 in this match, as Ekambi had some “Ekambi” moments once again, while on the other side the red card cut off the courage for Reims. Anyways, they did have some opportunities where they could score but Lopes did his job with the excellent note. 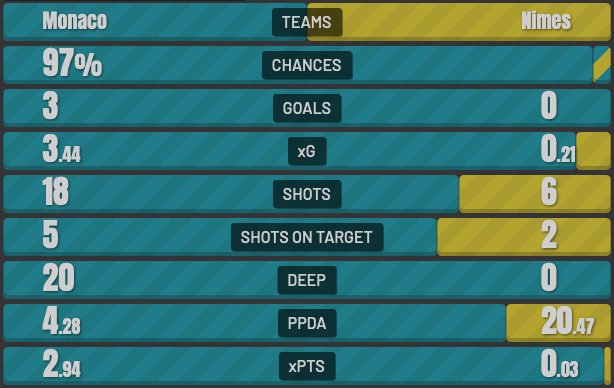 The picture above says everything about this match. Nimes have tried with some combinations, but didn’t succeed with anything in the final third of the pitch. I took a slightly different approach for this match and picked out two bets for the 1st half as I expected Monaco to start on fire after the huge morale boost by beating PSG, and at the same time also because I don’t trust Nimes when they survive 50-60 minutes on the “back foot” and get a bit more courage after… (that’s how they won in Montpellier for example). Monaco pressed high, took absolute control of this match already in first half (possession at the HT was 76% for Les Monegasques). I have to admit that if I knew the lineups, I might rather take the normal handicap (-1,5), as Kovac surprised with letting Ben Yedder on the bench, but they had plenty of chances already in this first half. Fabregas missed the impossible (first chance on the highlight video), but Diop’s goal brought us the profit anyways.