Conclusion: As you can see, I was very picky this round. I’ve said many times that I will always pick quality over quantity, and it’s true that if I picked all the leanings this round we’d have 6/10 but not much more profit than we had with two picks. At the same time, we’d take much higher risk, and I believe that “my way” brings bigger profit on long-term, and surely calmer way of betting, as there is almost no bigger jumps/drops. What is important for me, is that we are constantly growing little by little, and keeping the % really high. Actually “unrealistically” high at the moment. 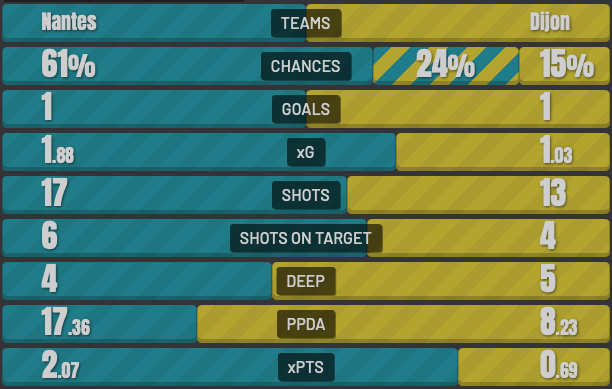 Typical match, where a huge amount of bettors went with the straight win of Nantes. What happened in the match was exactly what I wrote in the analysis, and therefore I am very satisfied suggesting the half-time bet here. As you can see on the picture above, Nantes were the better side, they had more chances and they should score at least a goal in last 20 minutes, but at the same time we have to stress out the fact that Dijon had a great chance only a few seconds after the equalising goal, and if Santamaria scored there for 1-2, Nantes would hardly recover as the mistake would once again go on the back of their captain and who knows where would the match go from there on… 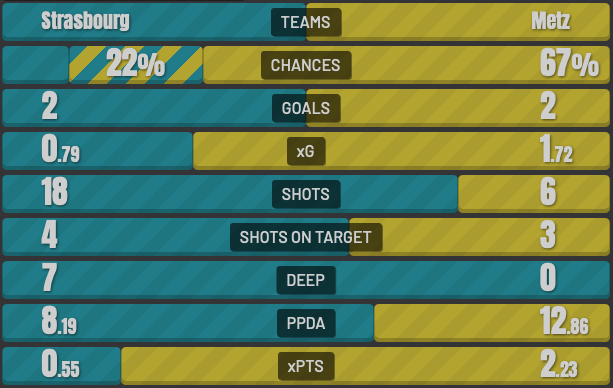 Yes, I expected way more from Strasbourg and when you see the percentage of chances on the picture above, it’s understandable to think that it was actually Metz that was closer to win the match. But at the same time, plenty of this xG came due to one of best prospects, defender Simakan had one of those days when balls simply want to touch your arm and therefore he “offered” Metz two penalties. Luckily, Kawashima saved one and kept us in the game, but few minutes after the equaliser, Metz scored again over Nguette, so the second goal of Strasbourg wasn’t enough for anything more than just a point on the derby.