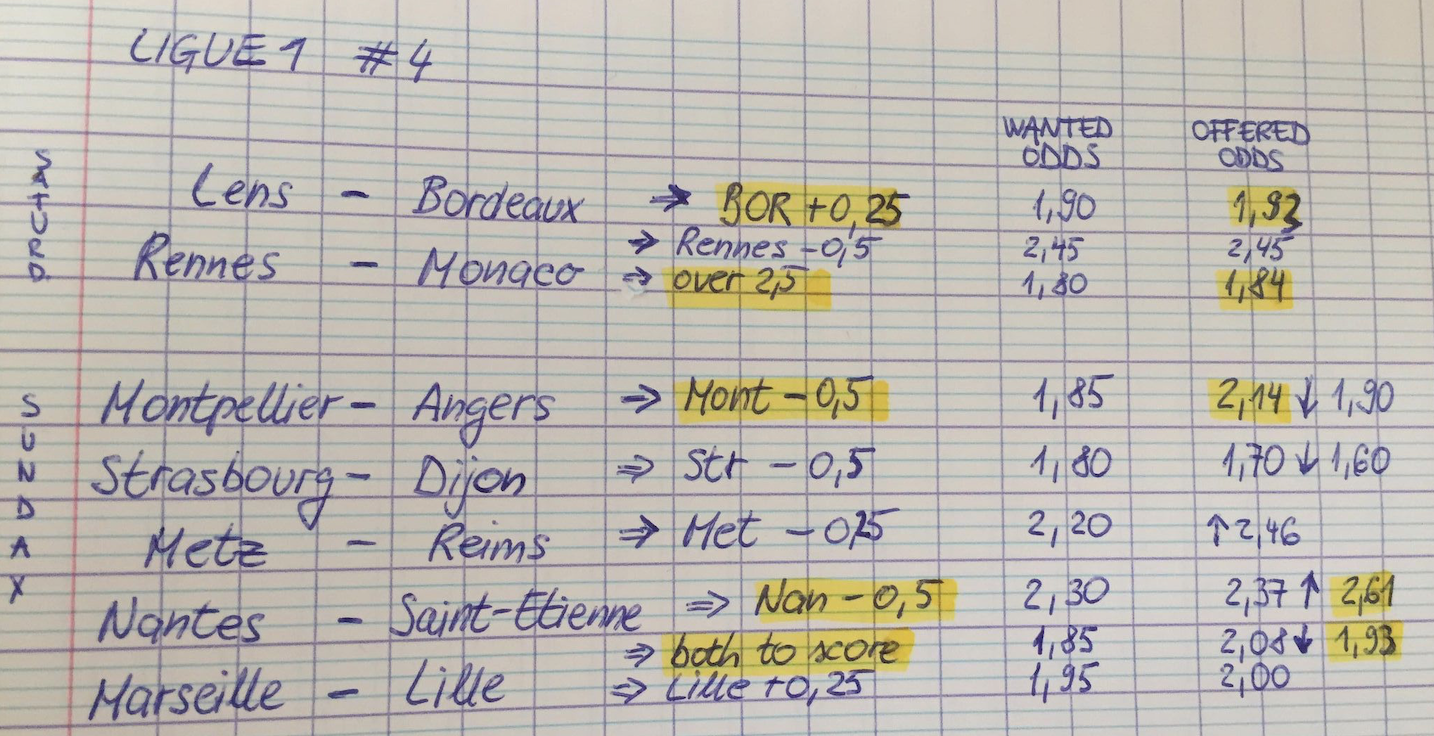 All, after all, I have to be satisfied with the profitable weekend, but looking at the leanings, we could get soo much more… As always, I am writing down matches I like, and setting odds above which there will be value for me. After that, I check offered odds for matches and if offered odds are higher or at least equivalent, I select them as official picks. Montpellier was an absolute banker of the weekend, as my line was at 1,95 and bookies offered 2,14. As you can notice, I decided to skip two winners – Strasbourg at home but I don’t regret it as the odds were under the line I wanted, and Metz where I should get involved… Besides Montpellier, lines on Nantes were looking rock solid for me, as I was aiming at 2,30 but the line jumped up to 2,61 an hour before the match. BUT … When talking about Nantes, unfortunately, I must once again mention the decisions of the referee’s this round, especially on the named match, where Anthony Gautier firstly didn’t even check the VAR for the possible penalty (take a look at the video – to be honest, no one will understand his decision), and shortly after he disallowed the goal of Nantes, as VAR revealed the offside during the buildup – almost 10 seconds before Kolo Muani scored the goal. Don’t know where were they a few minutes before, at the foul on Blas? 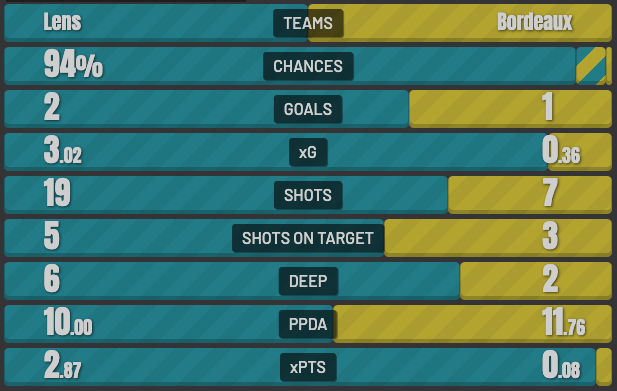 To be honest, that was the weakest pick this weekend, and if I knew that Kakuta will start the match, I’d probably even skip it. BUT, if you take a look at the goals scored by Lens – you will probably ask yourself how can that happen on that level. Especially the first one where Oudin (the player of Bordeaux) simply assisted for the goal. Anyways, even if they scored two goals after huge errors of Bordeaux, all I can say are praises for this Lens. They play with such ease. They have what the team needs in Ligue 1 – two, three players capable of making a difference individually – here, I am mainly aiming to Kakuta who looks incredible, being dangerous, creating, preparing chances every single round,… and players who are “eating grass”, fighting for the club, with a high level of discipline. As written in the analysis, I expect them to drop a bit with overall performances, but they definitely didn’t drop against Bordeaux who represented themselves once again in catastrophic shape. 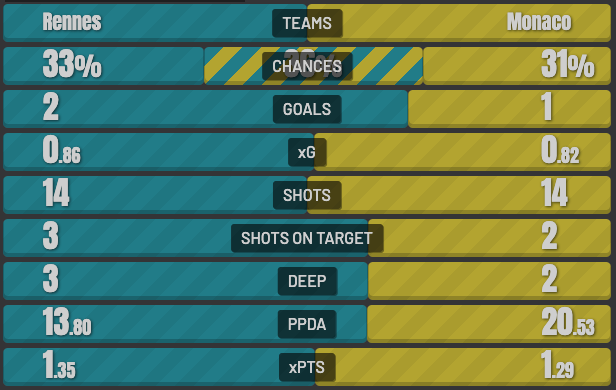 What to say about this match. The first goal arrived by a huge misunderstanding between Da Silva and N’Zonzi, the second after a solid counter-attack of Rennes, and the third after a mess in the box and bad reaction of Lecomte. All in all, I’m not too satisfied with the pick on over here, as I expected way more offensively by both sides. They both started somehow very cautiously, but luckily we got the first goal, and from the first minute of the second half things changed. We’ve seen a crossbar of Ben Yedder, where he should just pass the ball and give an “empty-netter” for Volland, a post of Borigeaud, and some other actions from both sides, so the match finished with 28 shots. With the quality in attacks of both sides, I’d expect a goal or two more, but 3 goals were enough for us as well. As you can see on the list, posted above, I was looking at lines on a straight win of Rennes, but I am “glad” not to pick it, as they were lucky to finish as winners here. Moreover, I think the midfield of Monaco completely collapsed after Kovac subbed Cesc Fabregas, who obviously simply isn’t prepared enough to play all 90 minutes. 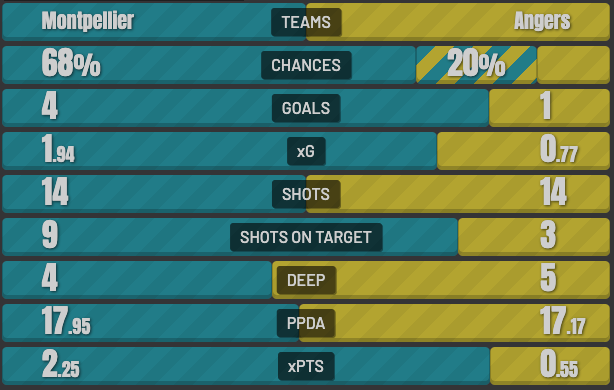 As mentioned above, that was the pick of the weekend, maybe the month where I was really surprised to see the line for -0,5 above 2,10. As expected, odds dropped to 1,9 and then slowly went back to 2 till the kickoff, but that wasn’t important for us as we caught them at the top. From the first minute, this match was more or less all about Montpellier, and even though Bahoken equalized from a situation, he’s usually having problems with, I had zero fear about how the match will go. After Montpellier being 2-1 in front, and half-time in front, things were almost already done, as they tighten up back there and focused only on counters. I really think Angers will have to check the players on the transfer market to fill the gap in midfield, as they definitely don’t have a player that can replace Santamaria. 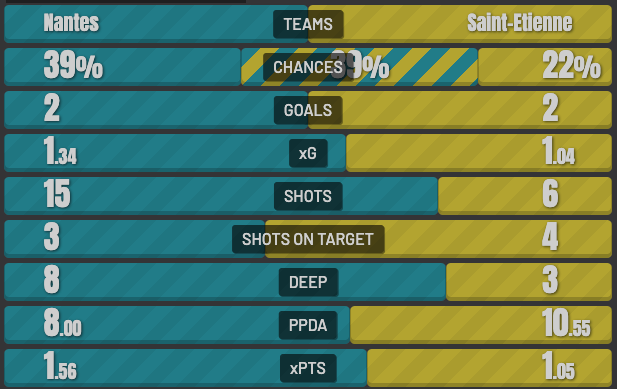 It will sound strange to some of you, but I am proud of this selection. If they play next weekend I’d take Nantes even at 2,25. The sloppy start of Nantes offered Saint-Etienne an early lead, and soon after that the referee Anthony Gautier stepped on the scene. First, he decided that there was no foul on Blas (100% penalty), then he canceled the equalizing goal of Kolo Muani after VAR revealed offside in the buildup – approx. 10 seconds before the goal. Saint-Etienne missed on superb chance but scored right after it, from the same action. Nantes on the other side, besides the obvious penalty and the canceled goal, had 15 shots, one of them being the 100% chance for Moses Simon in the last second of the match (at 2-2), but he missed and the match finished with the draw. Once again, after Montpellier, definitely the second-best pick regarding the value, but unfortunately didn’t go through. 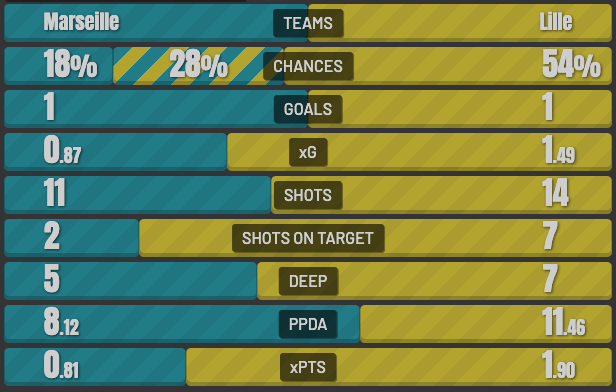 As noted on Twitter yesterday, Marseille added another weak performance to their account, and I can not understand how do they have 7 points. The only match where they were the better side, had more chances, performed probably the best this season, they lost 0-2 at Velodrome against Saint-Etienne. This match was all about Lille. Yilmaz scored shortly after the kickoff, but he was in offside (like many many times in the first half). Mandanda saved soo many chances, kept Marseille in the game, and when I said to myself that nothing can save us, Marseille will never score on this match, one corner-kick happened, where I even think it shouldn’t be the corner? And Germain took the advantage in duel with Sanches and scored for 1-1. Watching the match, I was almost sure we will see the second goal of Lille, but well… Marseille striked again. The worse they play, the easier they score. I definitely expected way more from them, even though you can see I was leaning to Lille +0,25 which was the “better” pick in this match. All, after all, the match finished with both teams to score and we added some units to our account.