Conclusion: By easily hitting two early picks, I must be pleased with the outcome this weekend. Unfortunately, odds weren’t “juicy” enough for me on Lorient +0,5 and Monaco -0,5 them, but all in all, it was a great weekend. With a bit of luck, we could nail at least one of those split staked matches, but goalkeepers simply had a good weekend too. 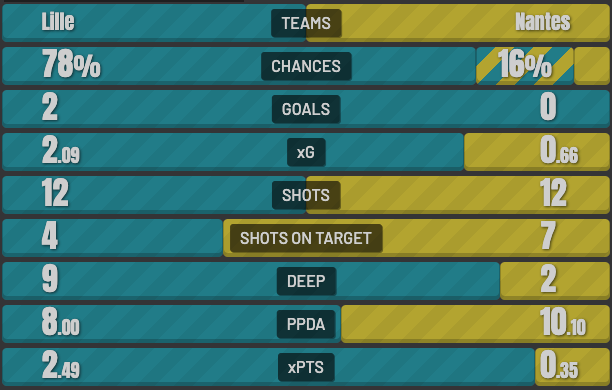 The only regret in this match was that I didn’t pick Lille early in the week at 1,80 for -0,5. Firstly, my only intention in this match was to take the win of the home side but analyzing the match, comparing “my wanted odds” with offered odds, I couldn’t resist and I split the stake and took over 2,5 goals as well. As you’ll be able to see in highlights, where we can’t even see all the chances of Nantes, it was due to a brilliant performance of Mike Maignan, the goalkeeper of Lille who kept this Lille away from conceding. Doesn’t happen often that you win 2-0 and it is actually your goalkeeper who is the best-rated player of the match right? Once again, Nantes created more than enough to score, more than enough to even make things very very difficult for Lille which once again weren’t as perfect as I think they can, or will be. As written in the analysis, the midfield of Lille was simply too good for Louza and Chirivela, who as expected physically simply weren’t able to cope. Chirivella lost the majority of duels, both were dispossessed more than 20 times,… Galtier offered the place in the middle to Sanches who played a decent match and there will be interesting to see who will get the place in the first lineup in their next match as all three Andre, Sanches and Soumare are in a decent form. Araujo once again preferred over Ikone, proved his excellent form, and was one of the best individuals of Lille. All in all, I can’t be unsatisfied by adding this over next to the handicap, because, regarding the odds (2,22), it was definitely much more 50/50 shot than the odds were showing. 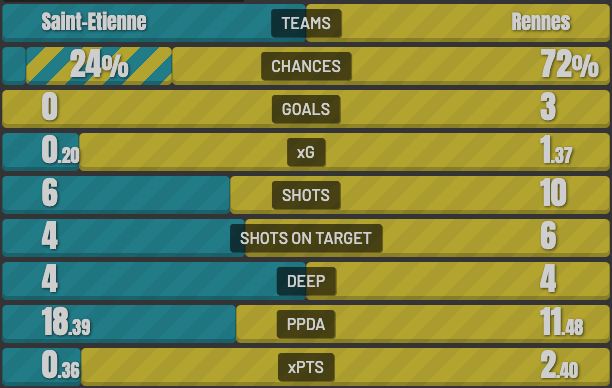 One of two huge value bets this weekend. When seeing odds on Rennes, I was forced to send it early in the week and odds dropped to 1,68 were already showing how right we were to take the early bet. It was a meeting of 1st and 2nd placed team, but as mentioned in the analysis, one were there because they deserved it, and other were there thanks to being lucky in several occasions, scoring without seriously creating something, not conceding from situations where was easier to score than to miss, and in this match, in a head-to-head between these two sides, we were able to see that at the moment, these two sides are incomparable. The truth is that the final result was maybe even to harsh, xG’s are pointing on that as well, but the fact is that Saint-Etienne just didn’t seriously threaten in this match. They had two or three situations, where they could have done it better, but still. Rennes controlled the match, they were better in midfield, they were more creative, had more chances and there is really nothing to say about… 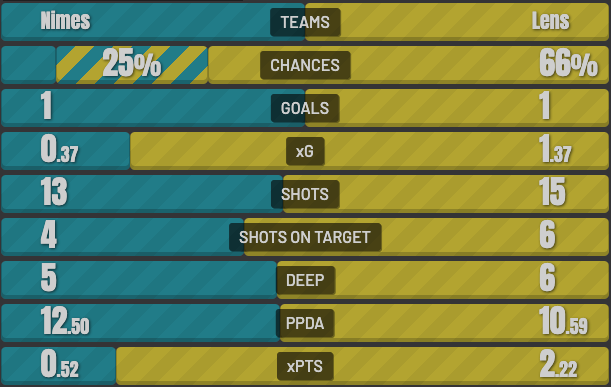 I’ve been considering three options here. Or to take only over in goals, or to take only both teams to score, but in the end, I decided to split the stake on btts and add btts&over 2,5 with a bit more value in odds. In the end, it came out as a good decision, as over wouldn’t go through, but I have to say that this match could have ended completely differently. Firstly, my expectations for Nimes were too high, while Lens continued with their “top-flight” football. Unfortunately for them, and maybe also for us, their best goalscorer Ganago who scored in the first half picked up an injury and was substituted at half-time. Otherwise, we’ve seen dozens of solid chances for Lens, Kakuta hit the crossbar from the direct free-kick, but the goalkeeper of Nimes – Reynet had a good day. Even though Nimes weren’t at their best, they still had 13 shots (Lens 15). The pick of the weekend, definitely. As said in analysis, for Reims that was the 4th match in 10 days, and as they lost some important players during the transfer window, they are without the depth in the squad, they aren’t in series of good results (what was pushing them last season), and the most important, they simply aren’t used to play every three days, they were tired. PSG played decent, very decent we could say, as if we don’t count the match against Nice, they created more chances than in all other matches together this season. Why only 0-2 then? Yes, that’s the real question. You will be able to see some missed chances in highlights, but definitely not all of them. For example, Sarabia came in instead of Icardi in the 78th minute and missed three very very good chances, one of them – 120% chance, but as said many times in past weeks, I honestly think this guy simply doesn’t have what’s needed to be part of this PSG. I’d much rather play some youngsters of PSG, who are eager to prove themselves, what Sarabia at least at the moment definitely isn’t. I have to mention one situation where VAR didn’t call for a penalty, even though there was a clear handball in the box. But that doesn’t surprise me anymore. All in all, this match could have easily ended with 5+ goals of difference. Yes, Dia hit the post right after coming, but at the same time that was also almost everything what Reims tried in this match. Neymar by himself created soo many goalscoring opportunities in this match, but some players, including Mbappe simply weren’t not even close to their best here… More in highlights (I don’t know why there is no 100% chance of Mbappe