Conclusion: As you can see on the list, I had plenty more matches in my head for this round, and I do have to be satisfied as I picked out only the “good ones”, but seeing Monaco winning, Dijon not losing, over between Angers – Nice, win of Montpellier,… Yes, I could get way more units of profit in this round, but at the same time Lorient missed the penalty for 0-1, Angers and Bordeaux didn’t score,… There could be some negative picks as well, and moreover, odds simply weren’t as high as I wanted them to be. All in all, that was another round where we added some units of profit and I am fine with that, and with all the positive feedback from you, I can say I am not the only one. 🙂 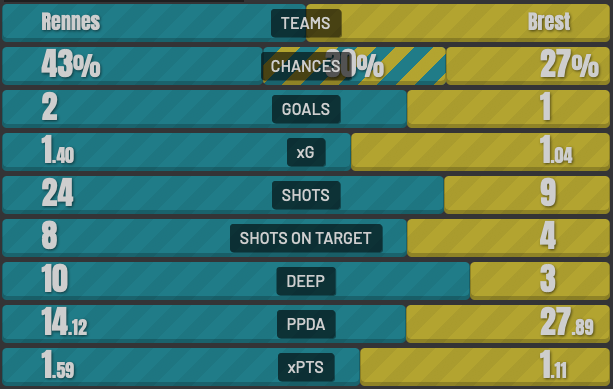 Rennes started the match with a very high tempo, they pressed Brest to defend. I wrote in the analysis that I expect Brest to surprise and attack, but I think they didn’t sit deeper intentionally, but simply because they had to. The opponent was by far superior, they hit the crossbar and missed one big chance in the first third of the match, but then once again had a moment of “concentration-drop” in their own box, the ball fell onto the foot of Honorat, and Stephan’s men were a goal behind. With 24 shots, it didn’t look like they miss their youngster Camavinga too much, as they were coming in the last third almost when they wanted to, but what they were missing was the decisive pass, final assist, or even direct individual move to score a goal – what they had in Raphinha. Doku had some good moves, but overall he didn’t impress. Brest had one better chance than the one from which they scored, but Gomis saved it. On the other hand, Rennes had dozens of chances to make the difference bigger, but the realization simply wasn’t at the point. 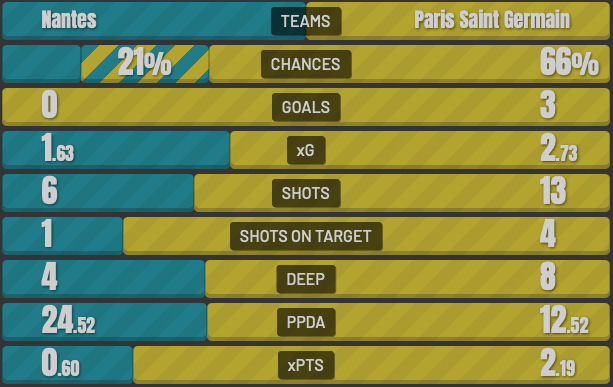 I expected Tuchel to rotate, but have to admit that I didn’t expect him to rotate that heavily. I think they didn’t even specially prepare for this match and even underestimated the opponent slightly what we were able to see from the way how they were positioning themselves at the beginning of the match. Nantes missed two very good chances and could make a night much tougher for the Parisians, but the reasons I was talking about in the analysis, why this team can not perform as it could, were simply visible as the black color on the blank paper. Tuchel saw what he needs to do, he gave Mbappe a narrower role, put Kean who was completely invisible out, and put young Ruiz on Mbappe’s place. From the first minute of the second half, it was obvious that Nantes won’t hold the clean sheet for long… All in all, that was maybe the “worst” bet of this weekend, or let’s say I am less satisfied with what I expected and what really happened, but it went through as the cleanest.

My pick: Strasbourg team totals over 1 at 2,01 Pinnacle 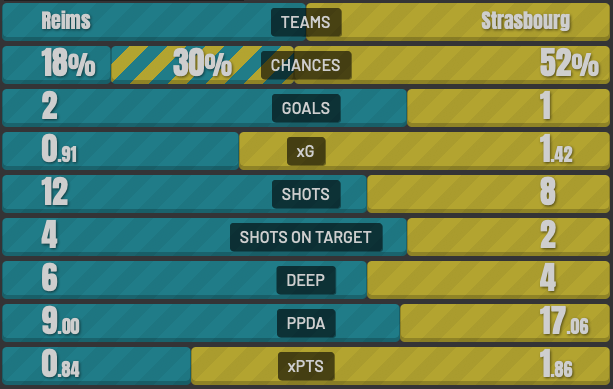 Reims took all three points in this match, which wasn’t that unexpected to me, but with the way the match was going through, Reims can be very happy to snap the victory here. Strasbourg created many more half-chances as expected, but Reims or let’s say Rajković and even more Faes succeeded to save all of them. On highlights, you can see the situation when Strasbourg already thought they scored the 2nd goal but Faes simply had his “head” in the right place and bounced the ball from the goal line. All in all, I’m satisfied with the pick as Strasbourg deserved even slightly more than just a goal here, so odds above evens were valuable for sure, especially regarding the fact that 1 goal means we get our stake back.